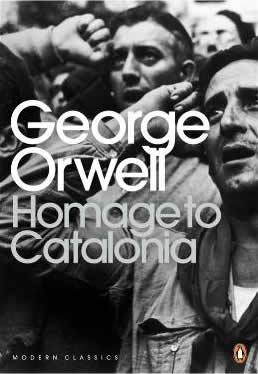 Homage to Catalonia by George Orwell.

Homage to Catalonia is George Orwell's personal account of his experiences and observations fighting for the Republican army during the Spanish Civil War.

George Orwell went to Spain in late 1936, in his role as a journalist, but then, pretty inevitably, put down his pen and spent the next year fighting with the P.O.U.M (Partido Obrero de Unificacion Marxista) Militia against the Fascist forces under Francisco Franco. Homage to Catalonia, written immediately after his return and published in 1938, tells the story of his military service with the POUM, both against the Right and the Left, and, in quick succession, of his initial hopes for the classless society that he thought he had found on first arrival, then of his disappointment with the level of disorganization of the Leftist forces and finally of his disillusionment when pro-Stalinist "allies" began attacking Socialists and Anarchists who refused to toe the Soviet line. Orwell, who by then had nearly been killed when shot through the neck in battle, and his wife were ultimately forced to flee from Spain, to avoid Stalinist security forces, which had labeled him pro-fascist.

The Great Books discussion is structured so that the evening’s selected reading is discussed in a think tank environment with the intention of gaining insight from other readers that one would not have by reading alone. The seminar facilitator asks questions of the participants about the reading selection and helps the discussion stay focused. Our main goal is to have fun and take many interpretations from the group in order to enjoy a greater understanding of a selected reading.

Discussions are open to everyone and free of charge.  For a list of past and future discussion books and to contact the group visit, http://mail.salticid.com/mailman/listinfo/forbes_great_books_salticid.com.

Hilary Caws-Elwitt has her BA in English & American Literature from Harvard, MLS from University of Arizona, and ran Susquehanna County Reads for its first 4 years. But mostly she loves reading and discussing the books!