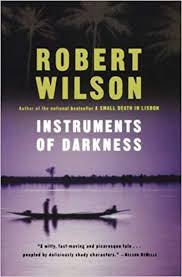 This month's selections are Instruments of Darkness & A Small Death in Lisbon, both by Robert Wilson.

Bruce Medway's existence as a fixer and troubleshooter had been tough, but never life-threatening until he crossed paths with the mighty Madame Severnou. His life becomes even more complicated by his search for a missing fellow expat, Steven Kershaw. Against a backdrop of political disruption and endemic official corruption, Medway pursues the elusive phantom of Kershaw.

Instruments of Darkness powerfully evokes the atmosphere, politics, and people of West Africa. With Medway's ironic voice, flashes of humor that may recall Raymond Chandler, and unforgettable characters, this compulsively readable thriller is the beginning of a remarkable series.

A Small Death in Lisbon:

1941. Klaus Felsen, forced out of his Berlin factory into the SS, arrives in a luminous Lisbon, where Nazis and Allies, refugees and entrepreneurs, dance to the strains of opportunism and despair. Felsen's assignment takes him to the bleak mountains of the north where a devious and brutal battle is being fought for an element vital to Hitler's bliztkrieg. There he meets the man who plants the first seed of greed and revenge that will grow into a thick vine in the landscape of post-war Portugal. Late 1990s. Investigating the murder of a young girl with a disturbing sexual past, Inspector Ze Coelho overturns the dark soil of history and unearths old bones from Portugal's fascist past. This small death in Lisbon is horrific compensation for an even older crime, and Coelho's stubborn pursuit of its truth reveals a tragedy that unites past and present. Robert Wilson's combination of intelligence, suspense, vivid characters, and mesmerizing storytelling richly deserves the international acclaim his novel has received.