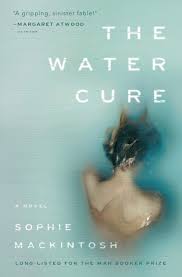 Respectful, queer/LGBT-friendly, easy-going bunch who want an excuse to get out more and talk about books. And have some snacks. Meetings take place on the first Monday of the month at 7 p.m.

This month we'll be reading The Water Cure by Sophie Mackintosh.

LONGLISTED FOR THE 2018 MAN BOOKER PRIZE

A dystopic feminist revenge fantasy about three sisters on an isolated island, raised to fear men

King has tenderly staked out a territory for his wife and three daughters, Grace, Lia, and Sky. He has lain the barbed wire; he has anchored the buoys in the water; he has marked out a clear message: Do not enter. Or viewed from another angle: Not safe to leave. Here women are protected from the chaos and violence of men on the mainland. The cult-like rituals and therapies they endure fortify them from the spreading toxicity of a degrading world.
But when their father, the only man they've ever seen, disappears, they retreat further inward until the day two men and a boy wash ashore. Over the span of one blistering hot week, a psychological cat-and-mouse game plays out. Sexual tensions and sibling rivalries flare as the sisters confront the amorphous threat the strangers represent. Can they survive the men?
A haunting, riveting debut about the capacity for violence and the potency of female desire, The Water Cure both devastates and astonishes as it reflects our own world back at us.

We also have a google group, where people post info about the books and sometimes social events. You can find us at http://groups.google.com/group/westernmassbookgroup or write to westernmassbookgroup@googlegroups.com Copies of the discussion books are available to check out at the main desk most months, unless the title is in too high demand.