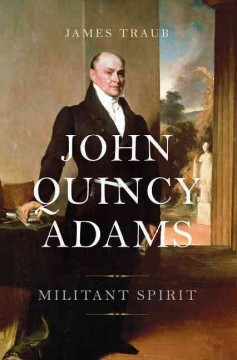 The October book is John Quincy Adams: Militant Spirit by James Traub. Print copies will be available at the reference desk and an e-book is also available via Overdrive.

Do you want to deepen your understanding of the American presidency? Then join the Calvin Coolidge Presidential Library & Museum's Presidents Book Group which meets on the 4th Monday of the month at 7:30 PM in the Coolidge Museum. We will be tracing the history of the presidency, beginning with George Washington, and watching how American democracy evolved in ways the Founders never anticipated. We'll follow how presidents, both celebrated and forgotten, grappled with slavery, economics, executive power and America's role in the world. In doing so, we'll broaden our knowledge of Coolidge, how he determined the course of the modern Republican Party, and where his presidency fits in the American story.