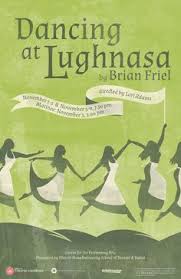 This month's book discussion will be about Dancing at Lughnasa by Brian Friel and The Countess Cathleen by W. B. Yeats.

Dancing at Lughnasa:
It is 1936 and harvest time in County Donegal. In a house just outside the village of Ballybeg live the five Mundy sisters, barely making ends meet, their ages ranging from twenty-six up to forty. The two male members of the household are brother Jack, a missionary priest, repatriated from Africa by his superiors after twenty-five years, and the seven-year-old child of the youngest sister. In depicting two days in the life of this menage, Brian Friel evokes not simply the interior landscape of a group of human beings trapped in their domestic situation, but the wider landscape, interior and exterior, Christian and pagan, of which they are nonetheless a part.

Read the best Ireland has to offer!  From the land of great story-tellers, we will be reading famous and lesser-known Irish authors, including contemporary and classic writers of fiction, non-fiction, and plays.  We will discuss style, sense of place, history, psychology, culture, and the Diaspora.  If you are interested in great writing, this is a group you will enjoy being a part of.  Upcoming authors include Edna O’Brien, James Joyce, Samuel Beckett, Donal Ryan, Colum McCann.  Come for the books, stay for the craic! Meetings are held on the second floor at the gallery tables.