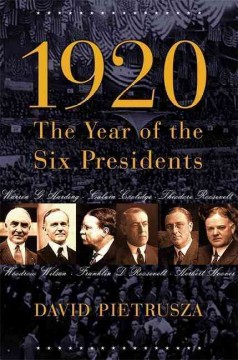 The Coolidge Standing Committee of the Forbes Library Board of Trustees invites you to the 1st annual meeting of the Coolidge Museum.

Keynote speaker is historian David Pietrusza, author of 1920:  The Year of the Six Presidents.  Copies of the book are available for check out from the reference desk.

The Trustees of Forbes Library are pleased to announce a new event, open to the public, that will occur at the library on Saturday, November 2 at 2:30. The Standing Committee of the Calvin Coolidge Presidential Library and Museum will hold its initial annual meeting in the Coolidge Museum. After some brief committee business, the afternoon’s focus will be on guest speaker, David Pietrusza, author of the book “1920-The Year of the Six Presidents”. Pietrusza, who has bachelor and master’s degrees in history from the University of Albany, is a well-known author, editor, lecturer and political commentator. He has written or edited more than thirty books including a four-part series dealing with the electoral histories of the 1920, 1932, 1948 and 1960 presidential elections. He is considered an expert on the presidency of Calvin Coolidge. His interests range beyond political history. From 1993-97, Pietrusza was president of the Society for American Baseball Research Pictures” Additionally he is an elector of the National Polish American Sports Hall of Fame.

Northampton played a large role in the 1920 presidential election as both vice- presidential candidates had Northampton connections. The Republican ticket was Warren Harding and Calvin Coolidge who, of course, was a Northampton resident and former mayor. The Democrat candidates were James Cox and Franklin Delano Roosevelt and Roosevelt’s maternal grandmother, Catherine Lyman, had grown up in Northampton. Please come and hear Pietrusza’s thoughts on both candidates as well as the role played by Woodrow Wilson, Herbert Hoover and Theodore Roosevelt in the first presidential election in which women could vote. November 2nd promises to be an interesting afternoon.